You can get your payday loan dosh back – here’s how

Christmas is over, the New Year is here and chances are that you’d like to make some changes. But besides losing the love handles and unsuitable romantic partners, what else would you prefer to do differently in future?

When it comes to money, the main regret that millennials tell me about is how quickly they built up debt in their twenties. For many people, it can take years to recover from a credit binge, with the most serious cases needing to be referred to debt charities and managed through debt repayment plans.

But perhaps the most poisonous form of credit you can take out in your teens or twenties is the payday loan. It first came on the scene after the credit crunch, just as the internet was taking off, allowing hard-up consumers to access quick and easy credit at the click of a button. 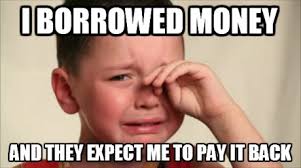 The mood music around payday loans has changed significantly since then. There has been a stiff regulatory crackdown, with lenders now forced to cap their fees at 0.8 per cent of the loan’s value per day. Customers are also not allowed to be charged more than twice the original loan.

And the crackdown has made a difference, with a third of payday lenders closing since 2013 and Wonga (arguably the biggest player in the market) continuing to post losses. The Financial Conduct Authority reckons the fee cap has saved 760,000 people some £150m a year since it was introduced in 2015.

But along with this crackdown is a rising awareness of the damage that payday lenders have left behind. The Financial Ombudsman says it received more than 10,529 complaints about payday loans in the 2016/2017  financial year – a 227 per cent rise compared to the previous year.

The Ombudsman said many of the complaints are historic and reflect a “growing confidence to come forward”. Policy and communications adviser Olivia Arasakesary says:

These complaints are being brought by people from a variety of backgrounds, including those whom society may not view as vulnerable, such as teachers, nurses, vets and business analysts. Many people who contact us have taken out more than one loan and it’s not unusual to see complaints involving 20-40 loans. But 10 – 20 loans is typical for a two year ‘relationship’ with a payday lender.

The reason this happens is that borrowers fall into a trap where they only repay a loan by taking out another – sometimes on the same day.

But the good news is this: you may be entitled to compensation if you complain to the Ombudsman about your payday loan experience.

You stand a very good chance of getting at least some of your interest refunded – if not all of it (plus a statutory rate of 8%).  It depends on what the Ombudsman decides is fair. You might also succeed in getting all “unaffordable” loans deleted from your credit record – which is brilliant if you’re trying to rehabilitate your credit rating.

So here is our quick Q’n’A on getting your payday loan payday.

How is your complaint assessed? The Ombudsman looks at whether you were sold an unaffordable loan. Lenders should meet the regulator’s criteria for selling affordable loans – this includes ensuring that customers can repay on time without undue hardship and without borrowing more.

So if your borrower conducted very light or no background credit checks, you may have a claim. And if you found yourself in a position where you were allowed to take out more payday loans, despite failing to pay off your first one, then this is a dead giveaway for the Ombudsman too. Other signs include going to a payday lender for a long period of time (several months or years) an having money automatically taken out of your account without your permission via a continuous payment authority.

It’s common for the Ombudsman to decide that if you ended up using payday loans for a while, the lender should have realised you were in trouble and either stopped lending or checked up on your personal situation.

So how does it work? You complain firstly to your payday lender, stating that you believe you were sold an unaffordable loan.

You may need to request information about your loans from the lender in question, finding out when loans were taken out and what was repaid when. The lenders should have email addresses for complaints of this nature. You may not get the info you’re looking for – lenders often try to be obstructive. Wait a couple of weeks before proceeding with an official complaint. Don’t worry if you don’t get all the details. Just concentrate on what your financial scenario was like when you took out the loan, how this meant the loan was unaffordable, how many subsequent loans you took out afterwards and how they trapped you in a debt spiral. Try to be as specific as possible and ask for a refund of your interest and extra charges. Also add that the Financial Ombudsman advises that you are entitled to statutory interest of 8 per cent.

You may get lucky in the first instance. But it is very likely that you’ll have to take this complaint to the Financial Ombudsman. It’s not a complicated procedure and you will be guided through it, step-by-step. Follow this link for more detailed info: http://www.financial-ombudsman.org.uk/consumer/complaints.htm

How far back can I go? All complaints are being considered, even those that occurred way before the fee cap was introduced. So there’s no time limit on this. If you’re in any doubt, make the complaint and see what happens.

What’s the success rate? In the first quarter of 2017, the percentage of payday loan complaints upheld by the Ombudsman was 68 per cent. No other category of complaints has such as high success rate. So it’s well worth making the effort.