Remember the Budget? Ah, that was before the John Lewis Crimbo advert came out, before Harry and Meghan, way back in the midst of time when…you don’t remember it, do you?

No, of course not. You’re a normal human being, that’s why. And to be honest, there wasn’t a whole lot that was memorable about the Budget, except a few jokes that could have landed the chancellor a spot on a particularly weak episode of Mock The Week and the announcement that he would be scrapping stamp duty for first time buyers. Woo-hoo. Well, sorta woo-hoo, if we don’t get a mass rush of new buyers into the market before new homes are built. In which case, prices will keep on trucking upwards and you can say bye bye to getting on the housing ladder in many parts of the country over the next five years.

But the big man at the Treasury also promised a range of measures designed to get more people teaching and studying maths. 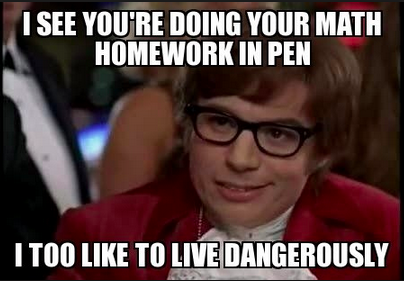 As a theory, this is something that is hard to disagree with. On a personal level, I believe better maths teaching in my school allowed me to overcome dyscalculia, a very real learning condition that causes difficulty when dealing with numbers. I have also done some work with the fabulous author and maths campaigner Shirley Conran to raise awareness of our cultural aversion to maths (particularly among women) that can seriously derail our finances.

But the initiative also sheds light on the government’s current position on financial education – and it isn’t all good news. A recent review by the All Party Parliamentary Group found that there were major deficiencies in how financial education was being taught in schools, despite it becoming a statutory part of the curriculum in recent times. But the government seems to be focusing on maths as the main way to boost financial confidence among today’s school leavers.

Will that approach works? Recently, I spoke to Russell Winnard from the financial education charity Young Money (I know it’s the same as the blog’s name, but we got here first!) We chatted for a Radio 4 documentary I am presenting on financial education this weekend. You can catch up online here if you miss it.

He told me that many pupils skip maths questions in exams that relate to insurance, interest rates, taxes and so forth because they don’t understand the context of these questions. In other words, you may know what a percentage rate is, but if you don’t know the difference between good and bad debt, you’re not going to avoid the pitfalls that come with borrowing money.

“Politicians are at risk of slipping into the mistaken belief that being competent with numbers equates to being good with money. While basic numeracy skills are helpful for budgeting and saving, many of our financial habits are in fact motivated by our attitudes and behaviours learned at a young age, and not by our technical competence with numbers. Evidence suggests that if young people can grasp the basic principles of healthy financial wellbeing, like budgeting, saving for the future and avoiding debt, they are more likely to be financially savvy.”

Justin Urquhart Stewart, co-founder and head of corporate development at Seven Investment Management (7IM), says weak UK growth projections outlined in the Budget may be driving the belief that more mathematicians could help solve the UK’s supposed productivity problem. He goes on:

“It’s a sensible approach, but it would be even better if it could be joined up with decent personal finance education. Research from the Money Advice Service earlier this year suggested that only 40 per cent of children aged seven to 17 say they have learned about managing money at school or college, and this is consistent across all age groups. This is shameful.”

Despite financial education being compulsory on the secondary school curriculum, only about 40% of state schools in England are teaching it. And there is no requirement to teach money in primary schools, despite the scientific consensus that children are forming financial habits from as young as 5.While nobody would dispute the need to improve maths teaching, it seems the government is mistakenly viewing more maths education as a cure-all for the UK’s financial literacy problems.

Maths is just one part of the picture. If you don’t learn about things like the psychology of money, economic cycles, wants versus needs and the ethics of money, you won’t be able to effectively use your maths knowledge in the real world to benefit your finances.
And the chances that young workers will remedy their weaknesses in this area are slim. The Money Advice Service (MAS) will be rolled up with two other financial guidance bodies next year, with the hope that this new beast will be far more influential in pushing financial education – but I fear the opposite will happen. And there is a serious lag in providing decent financial advice in the workplace to young employees, who are being shoved (sorry, automatically enrolled) into workplace pensions without even really understanding what they are.
What we now need is for MAS’s work in financial education to be taken more seriously and acted upon. It has been operating a What Works Fund in financial education to find out…well, what works. Because one of the problems is that we don’t fully understand which educational approaches make the biggest difference to young people’s financial outcomes.
I understand that lots of subject compete for attention on the national curriculum. And it’s essential to have a basic grasp of maths in order to manage money, even if you don’t fulfil the government’s wish of becoming a maths boff. But I guarantee that once they leave school, today’s pupils will be putting their  financial education into practice a whole lot more than Pythagoras Theorem.