What a legendary 102 year old can teach us about money

Sometimes, us youngsters can do a lot worse than look to the older generations for some much-needed inspo, perspective and all-round fabulous advice.

And when I say older generations, how about we try a legendary lady aged 102 years old? 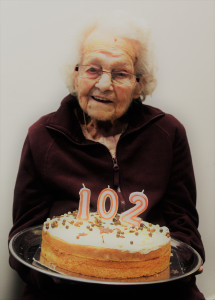 I saw a quite brilliant release put out by the Nottingham Building Society recently, and although I am not one to draw on such releases for stories, I just had to make an exception this time.

Edie Beasley is a customer of the Nottingham, which is a mutual with around 50 branches based in the area, and has been saving for most of her adult life.

At a small celebration to celebrate her 102 birthday at the society’s Hucknall branch, not far from where Edie lives, she took the opportunity to send a message to others who are not necessarily as canny with their cash.

Great grandma Edie, who spent most of her career working at Nottingham’s City Hospital as a domestic and then in the kitchens, said: “Saving is not about getting rich. It’s all about making your money work for you – however much you have. In my case, it has been putting a few pennies and pounds away every week – whatever is manageable – to make sure there is always enough aside for a rainy day.”

Edie understands that for some people, saving money is a difficult concept to grasp. Life hasn’t always been easy for her and she has had the same sort of financial pressures and outgoings as many.

But for her, it’s been all about keeping a sense of discipline and routine around her finances and making sure that as and when there is a bit spare that it goes straight into her account.

She says: “There is a lot of pressure on people, particularly those with young families, these days to have this and have that in terms of material goods but also because essential bills and other outgoings can add up to more than incomings. Like many others I have a family and bills to pay and, at times, things haven’t been easy financially. There have been occasions when I’ve been really badly off, but I’ve always tried to keep one eye on putting aside what I can.

“Popping into The Nottingham, as I do on a weekly basis, is a nice experience and they always look after me. It has been part of my week for a long time now and I think having that routine is really important when it comes to saving. Of course people can only save if they have the money, but what I’ve found works for me is not worrying too much about how much I can save but that I actually do. It becomes a habit, and it is nice watching a few pennies grow into a few pounds.

“What saving has meant for me is that although I’ve never been rich I could, eventually, live a comfortable life and one of the things I’m most proud of is that I’ve never had to rely on anyone else or borrow money.”

Here on the Young Money Blog, we’re a massive fan of healing intergenerational strife. We’re not afraid to say if we think that the older generations haven’t helped us out, or if we think some changed is needed in government policy or financial firms’ behaviour to ensure that young people do not suffer further down the line.

But we also believe the older generations – particularly those like Edie who have lived through the toughest times in modern history – have a huge amount to teach us when it comes to living simply, frugally and graciously. Centenarians have been around long enough to know the devastating aftermath of TWO world wars, rationing, multiple economic crashes and the 3-day week, not to mention a lack of comfort, warmth, convenience and opportunity that we all take for granted today.

On top of that, Edie lived through a time when women couldn’t take out mortgages on their own, didn’t have free reproductive rights, were barred from accessing certain jobs after marriage and still regarded as secondary workers even when they did enter the workplace.

Whilst we still have to make more collective progress in the financial liberation of many groups, not just women, Edie is a reminder that we all have some power to exercise (however small it may be), and the most powerful choice is not to squander tomorrow by living purely for today.

Because you never know – you might just live to 102 as well!