The government’s Starter Homes initiative to encourage more new homes to be built on brownfield sites, and help first-time buyers by offering a 20% discount on them, has been undermined by Labour and Liberal peers in the House of Lords.

The peers last week supported two amendments to the current Housing and Planning Bill, one of which would mean anyone receiving the 20% discount would have to stay in their first home for 20 years in order to keep it. They would have to repay all the discount less 5% for every year they stay in the property.

Lord Kerslake, a former head of the civil service, led opposition to the government, claiming that the peers were trying to protect the taxpayer.

The initiative will allow housebuilders to develop under-used or unviable brownfield land and free them from planning costs and levies. In return, they will be able to offer homes at a minimum 20% discount exclusively to first time buyers, under the age of 40.

But not if the peers get their way.

The Church of England is trying to force one of the world’s largest oil companies to confront the risks from climate change policies.

The church commissioners, the group responsible for managing the church’s £6.7 billion investment fund, have pushed climate change on to the agenda for ExxonMobil’s annual general meeting next month.

The church owns Exxon shares worth £5.8m and has filed a shareholder proposal urging the company to disclose the impact on its business of government policies intended to slow global warming.

If the vote is won by the church, it will be the first climate change proposal approved by Exxon shareholders, who rejected by 79 per cent a request last year to appoint a climate change expert to the board. 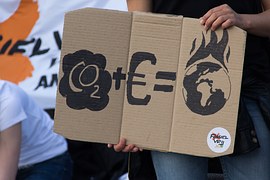 Future Finance, a private student loan company, is targeting growth in the UK. The company requires its customers to pay back small monthly amounts as soon as they take out a loan rather than wait until they graduate and have a job.

Founder Brian Norton says for instance the company knows “a nursing student from London South Bank University, statistically, is more likely to earn more in his or her first year after graduation than a Cambridge graduate”.

The company gets around 100 applications a day, and rejects half of them, but “not everybody takes up the offer so the acceptance rate is 10 to 15 per cent”, according to the Times report.   Could that be because of the interest rates?  Sadly they are not reported.

The average ‘bill shock’ was £146.It has launched a Tech in Check month – a campaign to help parents, guardians and kids keep their bills in check – on its website.

Its research found 25% of 25-29 year olds are still living at home, nearly 40% of young bankers and accountants were being “spoiled by getting their phone bill still paid for by their parents”, and two-thirds of parents saying they would continue paying their child’s bill for as long as necessary.

With the new tax year underway, nearly a quarter of people across the UK plan to save and invest more this year than they did in the year just ended, according to investment group Willis Owen.   That rises to 41% for the critical group of savers aged 25 to 34.

The firm’s boss Jason Chapman said: “The fact so many younger people plan to up their level of savings and investments in this new tax year is positive evidence of a saving culture among this age group. This is despite much-publicised financial pressures such as higher university fees and the increasing cost of getting on to the housing ladder.”

But of course it’s that cost which many are desperately saving to meet.