Have we reached peak iPhone? Why mobile contracts are in decline

It is estimated that four out of five people in the UK now own a smartphone. But of course, we could have guessed that, couldn’t we? You can’t go on public transport, meet your mates at the pub or even get out of bed without noticing how much Steve Jobs has changed our lives forever.

There we all, incessantly checking our phones to make sure we haven’t missed anything, whether it’s our emails, sleeping patterns or the latest tweet from Donald Trump. The sheer multitude of apps and the remoulding of our daily lives in response to them has even prompted some shape-shifting in the financial sector (never normally an industry to move quickly). In the past two years alone, fintech has exploded in a way that even the Young Money Blog has struggled to keep up with, catering to a new tech-savvy customer who wants to do all their banking on a device in their pocket, not down at the mouldy old bank branch with Mr Jobsworth.

Of course, there is a real risk that we’re becoming far too attached to these damn things, as Matt Bain has eloquently pointed out here and here. But we have to accept facts – our smartphones will only get flashier and better as time goes on. 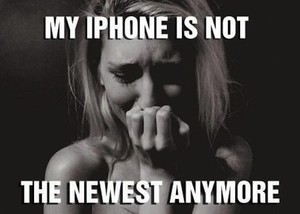 One of my first blogs six years ago on the subject of phones dated so quickly, it was positively cringe-worthy (it will be republished tomorrow as a fresh guide, so you’ll have to take my word on the original cut!) But in my defence, smartphones were still relatively new – the first iPhone came out in 2007 – and only a third of the population owned one. I still had a Nokia brick, which I loved deeply, although I knew in my heart of hearts that its days were numbered.

Vittorio Colao, chief executive of Vodafone, was almost spot on when he said that old models “would no longer exist” in 3 to 4 years, though actually my old Nokia brick has become a trendy Shoreditch accessory and apparently a safe haven for celebrities trying to protect nudey pics and other private info from The Dreaded Cloud.

And quaint phones without 3G are loved by those seeking respite from constant internet access and social networking sites, which I saw someone on Twitter describe as “a type of group therapy where no-one ever seems to get better”.

But sadly, Mr Colao was wrong to predict that prices would uniformly come down as smartphones became more ubiquitous. The 16GB version of the iPhone 4 retailed for £510 in 2011. Today, a box fresh iPhone 7 offering 128GB and a 4.7 inch display costs £699. Yikes.

So have we reached peak iPhone? The iPhone SE is the most popular phone in the UK, even outselling newer iPhone models, according to data from research firm Kantar. Could the reason have something to do with SE’s comparative cheapness (£319 from the mighty Argos)?

In my previous blog, I highlighted how many young consumers were relying heavily on long-term contracts from the likes of Vodafone, Orange and T-Mobile so they could get the latest must-have model for free. But most (if not all) deals out there are predicated on you paying a premium in the long run to spread your costs. Moreover, the cheaper and shorter the contract is, the less monthly allowance there is for texts, minutes and MB data.

So there is a (relatively) new game in town; buying sim-only deals and sorting out your handset yourself. A recent report from CCS Insight has predicted that the number of customers on SIM-only contracts will rise from 27 per cent to 34 per cent this year, and by 2021, the majority (54 per cent) of us will be on them.

“The move towards SIM-only shows a departure from the rigid two-year deal structure we’ve seen in the UK for years. The market for secondhand phones is also rising as a more affordable way for people to buy, and we are tending to hold onto handsets for longer. The replacement rates have definitely lengthened in the past few years, which is largely down to recent phone releases sporting less essential, non-exciting features.”

With sim-only deals, you can pick the data bundle to suit you without being tied to a specific phone that your contract provider will allow you. So you can squeeze as much value from a lighter contract and easily upgrade without changing your phone.

As a (very) rough rule of thumb, I would say that anyone who is paying more than £15 a month is quite possibly paying over the odds for a contract they’re not fully using and a phone that they maybe don’t fully need. You can check out my super-helpful guide to getting a boss deal on your smartphone here.

Mr Mann also highlighted that some of us are upgrading our phones, then selling the old models to offset the cost of the model. But the rest of us seem to be PERFECTLY OKAY with, y’know, NOT having the absolute latest iPhone just because it’s now available in Jet Black (who cares?)

Because when push comes to shove, you’ll never stay completely up to date with what’s in and what’s out. I was chuffed to get a rose gold iPhone SE the other week, thinking I was the height of cool, only to be told that my colour scheme was “sooo last year”.

You just can’t win when it comes to your smartphones – at least not around smart-arses.