Beware when googling your finances!

Alongside the spectacular fall of Neil Woodford’s investment empire, one of the biggest financial scandals to erupt this year has been the collapse of London Capital & Finance. The mini-bond firm now owes £236m to thousands of investors after going bust in January and is being investigated amid allegations of fraud and false marketing. Indeed, the Financial Conduct Authority itself is being probed for its failure to spot the firm’s suspect activities sooner.

But questions are also being asked of Google, social media platforms and media companies after it emerged they all hosted advertisements by the firm that promised high interest returns for ordinary savers. Following my comments for Yahoo’s latest investigation into Google, I analyse what the case means for young people and why it ALWAYS pays to be a sceptic about online financial marketing…

One of the most disturbing aspects of the LC&F saga is that it wrongly claimed to offer fixed-rate Isas, paying 8 per cent a year on savings. Isas are a regulated financial product and “fixed rate” interest is commonly associated with deposit savings, which typically come with cast-iron safeguards. The better-than-average interest was advertised through Google, social media platforms and even national newspapers thanks to a £20m marketing campaign.

The truth was that LC&F were offering mini-bonds, which are complex, unregulated and high-risk debt securities. These are issued to the investor as an IOU, with the issuer (i.e. the investment firm) taking your money and putting it in places where it *thinks* it can achieve the return it promised.

But as the FCA itself notes on its website:

The return on investors’ money entirely depends on the success and proper running of the issuer’s business. If the business fails, investors may get nothing back.

This is a far cry from the commonly-established definition of a fixed rate bond, which guarantees the payment of the interest rate when the term of the bond ends. Fixed rate bonds are usually offered by banks, building societies or other savings providers that guarantee your money under the Financial Services Compensation Scheme, should any of those institutions go under. Investment companies – like LC&F – offer no such protection, as some 11,600 investors have painfully discovered. 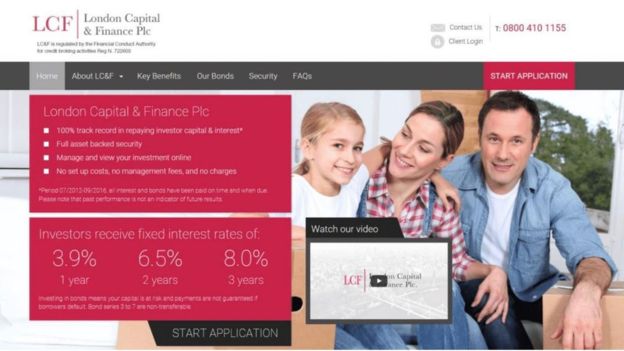 The scandal has rightly attracted the opprobrium of consumer advocates and MPs across the political spectrum. That salesmen could falsely promise a fixed rate of interest, only to suddenly dissolve and leave investors nursing irretrievable losses, is bad enough. But what’s truly galling is that

a) this cowboy outfit was actually authorised by the FCA due to a loophole which means firms can be approved, but not their activities;

b) the FCA gave the green light to this marketing campaign, despite its evidently misleading nature;

c) the likes of Google, as well as social media platforms and mainstream newspapers,  didn’t question the language or messages being communicated in the adverts they were paid to host.

I can’t comment on what the FCA knew about LC&F was doing until the various investigations are concluded (the date of which is uncertain). There is no suggestion that external parties knew about or were complicit in any illegal activities and without seeing the exact wording of all the promotions published – they are surprisingly hard to find after the event! – I can’t know just how erroneous all of the LC&F adverts were.

I was particularly alarmed that one company can say it offers “high interest savings” of up to 10 per cent on investment Isas without any risk warnings – some of the others at least state that capital would be at risk. The fact that such descriptions are allowed to creep into search results for deposit savings, just because companies are paying the right price to Google, is pretty repugnant.

I say in the article:

This market needs special consideration because a) the problem is clearly proving hard to manage and b) few products can be quite as destructive to people’s lives as high risk bonds masquerading as savings accounts.

After all, as I said in the Yahoo article:

“At a very basic level, most people don’t fully understand the difference between deposit savings and investment products…even knowledgeable people would be forgiven for being confused by the word “bond” which can also be found in the savings world.”

How to avoid falling victim to the mini-bond sharks

Too many people fail to understand that their money is at risk in these products. Of course, it doesn’t help that companies are still (!) wrongly saying that returns are “guaranteed” or “safe”. These words should be expunged from ALL advertising for mini-bonds – but until that happens, it’s on you to avoid being duped.

If you’re frustrated by shit interest rates, I hear you. It’s all-too-tempting to seek out alternatives that promise the moon. Young adults have only ever known rotten interest rates and their savings being eroded by inflation in real terms. And my heart goes out to the ordinary savers who lost vast sums when LC&F went under. Their failure to grasp that these products are not the same as savings accounts, underpinned by the Financial Services Compensation Scheme, is not entirely (or even mostly) their fault. Besides the willfully misleading promotions, most people are so poorly educated and informed when it comes to money that their capacity for mistakes is colossal.

But as explored above, it’s (sadly) unwise to trust that the regulator has got your back. It’s unwise to take any form of financial advertising at face value. It’s unwise not to read the small print (which nearly always DOES appear somewhere, however Lilliputian). And it’s certainly unwise to shun cash altogether, put *all* your spare money into speculative investments and hope for the best.

And while Google is probably your first port of call for most things – savings deals, film trivia, instructions on how to remove streaky fake tan – it’s far from reliable on many things. We all know this, and yet companies still pour millions into Google advertising in the hope that some of us will forget. If you’re trying to educate yourself about money or find a better financial deal, you need to ask yourself four questions;

1. Have I looked at this product using three or more different sources?

3. Is the organisation being paid to write good things about the product (look out for phrases like “advertorial”, “sponsored post” and copious links to the product’s website)

4. Have I read all the terms and conditions available and do I completely understand what this product is?

People need to trust that their search results will produce reliable and helpful solutions. But until Google (and others) clean up their act, the golden rule is that if something sounds too good to be true, it probably is.