Dreamland – why it could have worked

Re-opening in a blaze of retro glory last year, there was such a buzz surrounding Dreamland, Margate. The Victorian amusement park was once a legendary British seaside attraction, open for over a hundred years, before its decline and eventual closure in 2003, a tired and sorry shadow of its heyday.

The future of the site looked depressingly fated – a soulless residential and retail complex. That is until a group called the Dreamland Trust conceived of an alternative vision for the site. Bold, original and inspired, it had twin imperatives – commercial and artistic. Dreamland would reopen as a commercially-viable amusement park and funfair. But Margate’s burgeoning name as a destination for the aesthetically-inclined has grown since the Turner Contemporary gallery opened a few years ago, and the new park would cement that reputation. It would re-open, not as a high-tech theme park, but something altogether more special.

Walking into Dreamland in March, I had no idea what to expect. So I was delighted (and surprised) to be catapulted back in time to the golden age of funfairs of the 1950s – not that I remember them, but I think that’s the point, right? The park is a unique and nostalgic throw-back to a time where the British seaside was the height of entertainment and escapism from a tough life. The park taps into our collective yearning for that simpler age, which we all, no matter how young, feel a little curious about. 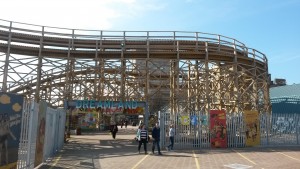 While I enjoyed revisiting my childhood on various rides – dodgems, the helter skelter, original grade II listed wooden rollercoaster, gloriously high Ferris wheel – my sister was struck by how incredibly beautiful and well thought-out the aesthetic scheme for the park was. From the impeccably restored rides, designed by Wayne Hemingway, to nods to art deco, souvenirs and furniture from local artists. Walking into the arcade was like stepping back into the 1960s, as hits from a huge jukebox boomed around the roller-disco, ice-rink and 50s American diner and we marvelled at all the old-fashioned, restored pinball machines and arcade games, all lit by vast tracts of neon lighting.

But not everyone gets Dreamland. Richard Morrison, in last Friday’s Times column piece, in which he described the whole project as a gigantic waste of time (having not actually visited the new park) thinks Thanet Council should have spent its money on a more obvious ‘artistic’ endeavour, something like the gigantic statue of a pregnant woman by Damien Hirst in Ilfracombe. He gave short shrift to the admirable individuals of the Dreamland Trust, who came up with an original and ambitious venture and had the determination to obtain funding worth £18 million.

Dreamland was conceived as an artistic and commercial attraction, which would always be a difficult balance to strike. With a large number of staff and running costs, the park needed to earn its keep, and, quite simply, get enough people through the door. At £17.95, the entry fee is a bit steep, especially considering Margate is one of the most deprived areas in England. The park is now experimenting with free entry in a bid to keep its door – let’s hope that has the desired effect.

Perhaps it hasn’t been publicised well enough and needed more of a chance to succeed. Dreamland clearly had a very narrow window in which to prosper commercially and there are numerous examples of much-loved public attractions staying open, despite accumulating losses. The Eden Project, which strides multiple realms in a similar way that Dreamland does, made its biggest ever loss two years ago of £6.3million. 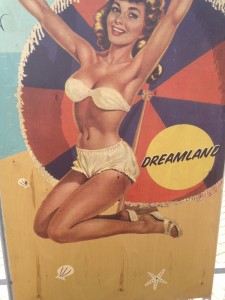 Margate is only an hour’s rail journey away from London where there are plenty of affluent families who would love the gentle rides that Richard Morrison dismisses (although there are plenty of some rides for hardcore thrill-seekers). Morrison believes teenage boys are what makes the economy (or at least theme parks) go round, but attractions need to provide fun for all the family –and Dreamland does that in spades.

Furthermore, aspirational hipsters from the capital would love the vintage vibe of Dreamland and Margate itself, with its trendy craft-beer serving pier bars and antique and indie clothes shops. Most importantly, people from the capital have money. They are the core market that Margate needs to reinvigorate its local economy. The trend is already beginning; house prices in Margate jumped by nearly 25 per cent last year, with many young Londoners coming to the coast to buy beautiful family homes that would cost millions in London. Commuters want to get away from the frantic, claustrophobic and expensive nature of city living. Kent is increasingly their number 1 alternative to renting a horrible dosshouse in Zone 3.

So why hasn’t Dreamland become a beneficiary of this trend? I believe the publicity just wasn’t there. You have to get Londoners into Margate to see what it’s got to offer. I have seen little evidence that Dreamland was sufficiently promoted in London – where were the tube adverts? Where were the billboards? Where was the sophisticated digital marketing campaign that is essential these days?

Banksy’s Dismaland shows that there is a huge demand for public attractions blurring the lines between art and entertainment. True, Dismaland was only open for a short period of time and it had the cache of Bansky’s world-famous name. But a determination to keep Dreamland alive could have been a spur for innovative and publicity-grabbing initiatives (a summer festival with top live acts, maybe) that might have subsidised the park’s activities – or at least acted as an effective loss leader – so that the park could start turning its fortunes around.

Dreamland was truly memorable and unique, and forever merged with my memory and idea of Margate now – and surely that is what the local council, driven by a desire to improve the fortunes of a disadvantaged and looked-down-upon town that is very beautiful and has a unique artistic identity. Dreamland, while it’s still open, is a big part of that.

So I urge you to make the most of this attraction whilst it’s still open – you may not have the chance for very long.