You know that smug friend who bought a load of Bitcoin in 2017 and crowed about how rich they were gonna be?

Today, commentators are speculating just how low Bitcoin can go. There was mini Santa Rally last month, true, when the market lifted by 10 per cent. But that bull run didn’t continue, and the price is now hovering at $3,521.05 – a rather measly £2,739.69 (as of 13 Jan).

Naturally, the Bitcoin bloodbath has prompted speculation about the future for everyone’s favourite crypto-currency (and when I say favourite, I mean we all like to talk about it and think about buying it for all of 30 seconds before resuming Game of Thrones.)

Investors’ memories are long, especially when many are nursing huge losses, so it could be a long time before we see money flooding back into crypto from ordinary investors and speculators.

But some brave souls are keeping the faith. Most notably, these parents who just put an advert in the Times, soliciting an alternative way to fund their newborn’s university education: 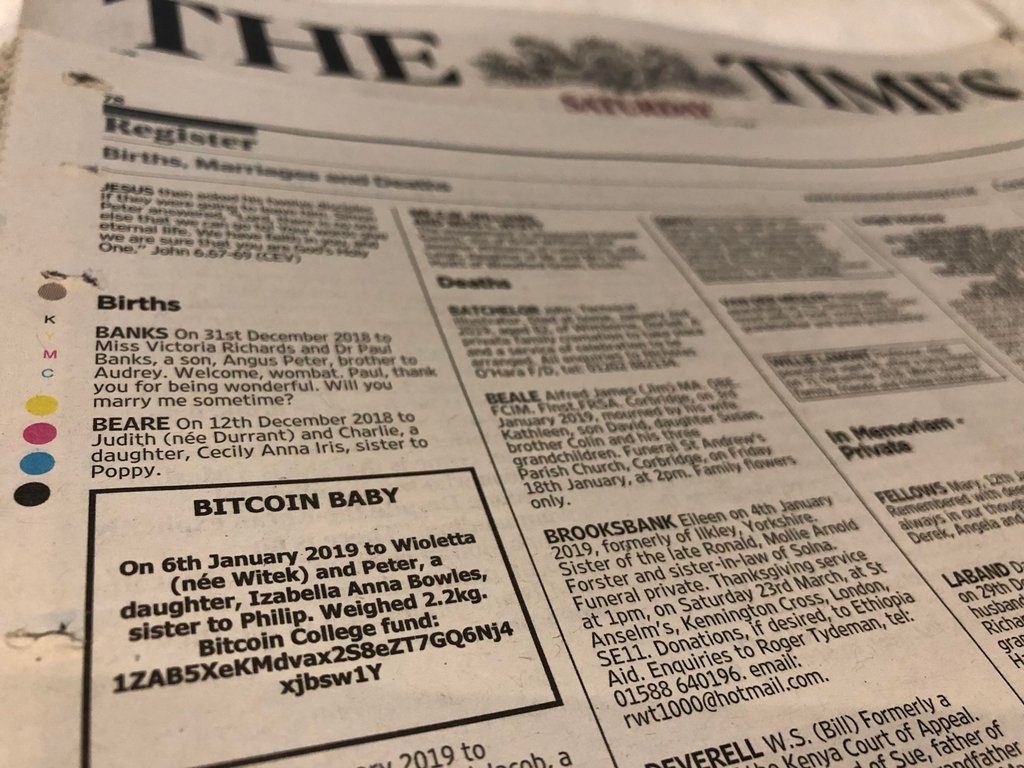 Amazingly, 100 people appear to have donated thus far (as of 13 Jan), with Bitcoin.com suggesting that the fund has already produced 7 per cent of the average university education kitty now needed in the UK (around £40,460)…I’m not sure about those maths, not least because they are based on the assumptions that the cost of university will remain the same and, of course, Bitcoin won’t become more worthless than a character reference from Piers Morgan.

Marc Shoffman is a former colleague of mine and esteemed financial writer. He invested £10 in Bitcoin as an experiment in 2013. His stake grew into the thousands during last year’s spectacular rise, but it now stands at around £466. He says:

I was lucky with the timing as I entered the market as it was growing. I have still managed to get a 4,780 per cent return on my money – which is pretty hard to find elsewhere at the moment. But the key, as with any investment, is to only put in what you can afford to lose. I only put a small amount in so I can afford to hope that the price will again rise to new heights.

Wise words. Marc admits the rollercoaster ride is largely down to continued uncertainty over the best use for Bitcoin, which was founded by a still-unknown developer in 2009.

As a currency, and backed by its block-chain technology, it has the potential to help those unable to open a bank account or with poor access to financial services. As an asset it is uncorrelated to stocks and shares, so provides the potential of extra returns for the more adventurous investor. There is nothing wrong with being both, but the volatility will only be controlled in the long term once its use is much more established.

Indeed, the government and tax office took major steps towards defining cryptocurrency’s status in the UK recently. City minister John Glen indicated that the Financial Conduct Authority will be given powers to regulate the likes of Bitcoin, treating them as financial tokens rather than a currency.

This will give consumers greater protection against mis-selling, fraud and the collapse of crypto platforms. It was responding to recommendations made by the Treasury Select Committee, which wants Britain to be a “global centre” for crypto transactions.

A waste of time?

There was some interesting analysis published at the weekend on Coin Desk by Kevin Dowd, economics professor at Durham University. He reckons bitcoin will bite the dust because the Bitcoin mining industry is a monopoly and that it is being superseded by superior rivals in a market with no regulatory barriers to entry. As he explains:

My reasoning is based on two simple economic arguments. The first is that the bitcoin mining industry is a natural monopoly and a natural monopoly undermines bitcoin’s core value proposition. The second is that in markets with zero regulatory entry barriers, an inferior product cannot survive long-term. Either of these arguments is sufficient to produce my conclusion that the price of bitcoin must go to zero in the long term.

Although of course, his analysis applies to Bitcoin only. In fact, this rather gives oxygen to other, less celebrated crypto-currencies, which have actually caused Bitcoin’s share of the market to fall from 94 to 52 per cent in less than six years.

If you are still adventurous to buy and hodl Bitcoin – it’s not a typo, look it up! – then be aware that tax rules have also been tightened up. HMRC closed a loophole that saw crypto gains being classed as gambling wins. It now expects investors to pay full capital gains tax if they buy cryptocurrency purely to make a return, while tokens paid by employers, transactions or free coin giveaways (known as “airdrops”) will be subject to income tax and national insurance contributions. But lenience may be shown if crypto investors are defrauded, see their holdings become worthless or lose access to their account so long as they can prove it.

Cleaning up the Wild West of crypto is a good thing for consumers and the industry itself if it wants to attract mainstream interest, but it could raise costs. The days of crypto start-ups fundraising through so-called initial coin offerings may well be numbered, to be replaced by compliant security token offerings, which we are already starting to see happen in the US. The introduction of licensing regimes for crypto exchanges, as already is the case in Japan, are also a near certainty. 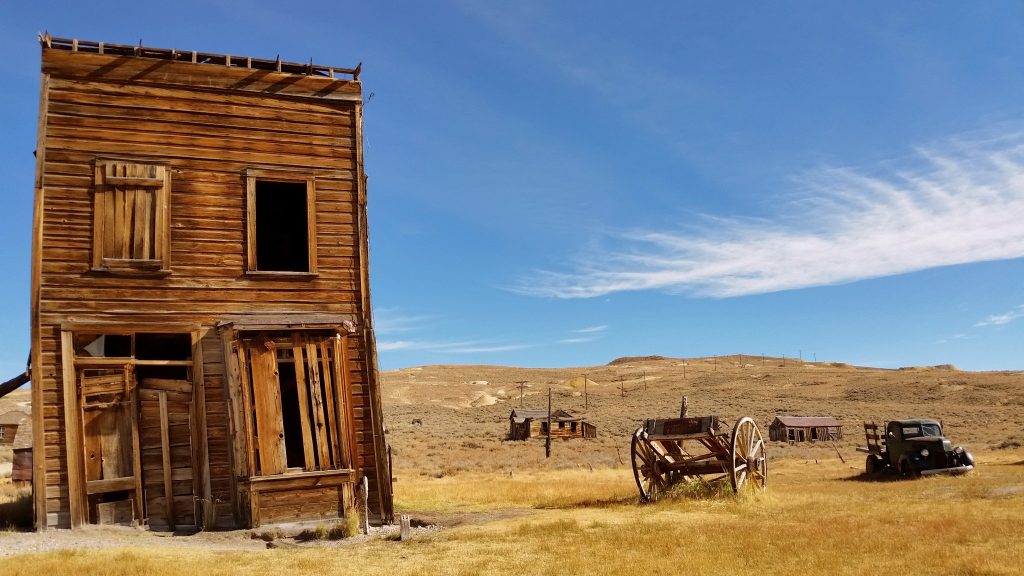 Nigel Green, founder of the deVere financial group, says increased scrutiny from regulators, while welcome, has driven Bitcoin’s turbulence in recent times. But he believes “herd mentality among investors” and the introduction of a new spin-off of Bitcoin Cash were also to blame. Bitcoin Cash – a separate crypto currency from Bitcoin and one of many so-called “hard forks” from the underlying block-chain – itself split into two versions, which have recently divided investors in the market.

Green, whose company runs its own cryto exchange, says:

Crypto cynics are using this current wave of volatility to knock digital currencies. Whether it is Bitcoin, or any of the current generation of coins, or not, cryptocurrencies are here to stay. Savvy investors…will be capitalising on the lower prices in order to build their portfolios and shore-up their positions.

Well, he would say that, wouldn’t he? But it’s probably fair to say crypto more generally is here to stay, albeit cruising at a slightly more gentle level than in 2017.

My guidance to young investors is two-fold. Firstly, don’t even think about Bitcoin if you are in debt, still getting your savings together or new to investing – that rules out most people under the age of 35, in my experience. To those who have an investment buffer in place and are dreaming of another Bitcoin (or general crypto) boom in the future…make sure that you only invest small sums that you can afford to lose, like Marc did, as well as keep locked up for quite some time, since crypto is pretty illiquid in reality. 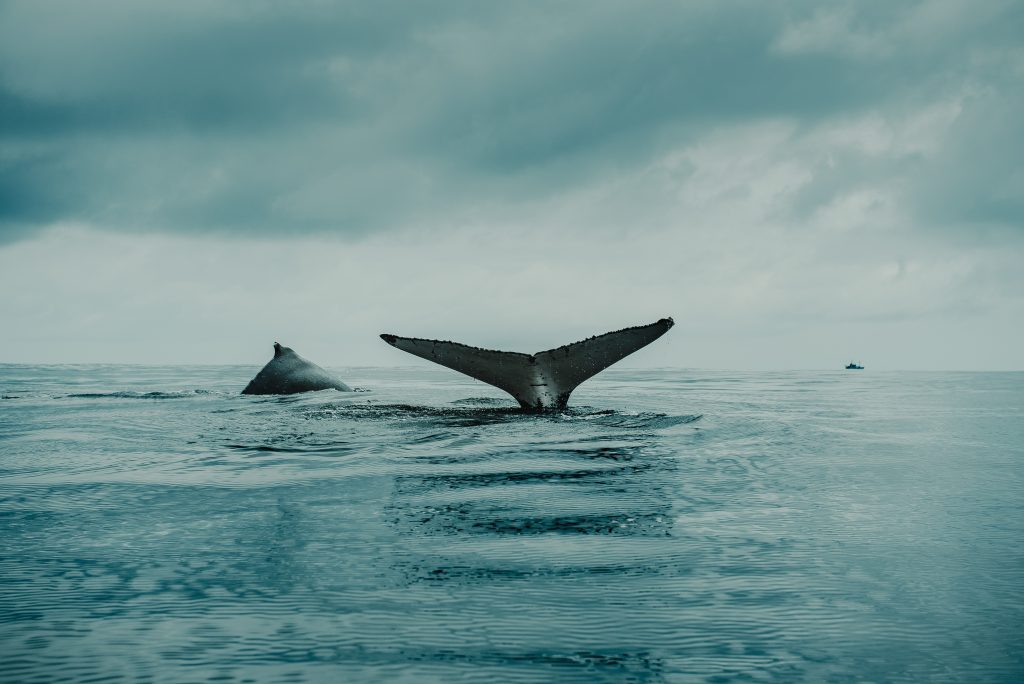 And for those already invested in Bitcoin, brace yourselves. Zero Hedge points out that whale accounts – a tiny number of largely dormant investors who control 85 per cent of Bitcoin accounts – have started to make waves. Trades from these accounts have picked up again in recent times – whenever this has happened before, it has foreshadowed either a massive rise or slump in Bitcoin’s price. You have been warned…

What do you think? Are you a Bitcoiner keeping the faith? Curious or downright sceptical? Leave a comment or tweet @ionayoungmoney…