You’d think that young people would be so disheartened by the now-astronomical costs of buying property, most would give up on the dream of home ownership altogether. Far from it!

There have been two more pieces of research published this week which show how the flame of property desire still burns for this generation. One survey from Aviva shows that a third of young buyers would be prepared to buy property in areas with high crime while a similar number wouldn’t be put off by flood warnings. Meanwhile, a survey by Nottingham Building Society found a quarter of young people are prioritising property when it comes to saving – with only 8 per cent saying the same for their pension.

Subsidising the cost of property buying has been the alpha and omega of Conservative housing policy since the party came back to power. That’s why we have had Help to Buy in all its various permutations but there are now clear signs that this far from a silver bullet for our housing woes. For instance, it has recently been found that buyers in 46 per cent of local authorities in England will not be able to use Help to Buy by next March due to runaway house prices. Furthermore, the bonus is not even available to help with your deposit, it now turns out.  You only get the 25 per cent extra at completion, rather than at exchange of contracts (when the extra cash is really needed).

You need £77,000 a year to get on the housing ladder in London, yet graduate wages have actually stagnated since the 1990s, meaning only a lucky few will have a realistic chance of matching the capital’s blingy house prices with their salary alone. 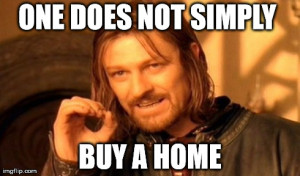 To be fair, the government may be starting to realise that we need a holistic answer to Britain’s housing woes that partly addresses the exorbitant cost of rent, with tougher taxation for buy-to-let landlords being introduced earlier this year. However, as with all government policy, there is the law of unintended consequences; there have been reports of a spike in the number of previously professional landlords turning to AirBnB to rent out their properties in the holiday lets market while experts predict a dwindling number of buy-to-let properties, managed by decent landlords, will harm rather than help young people in the long-term. Perhaps a more helpful intervention would be in the lettings market, where unscrupulous firms continue to engage in ruinous practices (such as exorbitant fees) that make a life a misery for many young people.

One statement of the bleeding obvious – we need to build more housing – is routinely trotted out by uninspired politicians who want to cling to the safe middle ground while not wishing to propose anything radical or controversial, even though that is what will be needed. For instance, we would have to reassess planning regulations on a mass scale and that could easily lead to taller, more crammed residential buildings in city centres. These are not tremendously popular in this country (for good reason). Tall buildings with lifts – and newly built tall buildings with lifts at that – often come with tremendously high service charges and a roll-call of problems that will be expensive to fix in the long-term. New build homes are unfortunately not always of the best quality and often have very stingy proportions, with next-to-no outside space or balconies to improve quality of life.

Across the North East, North West, Scotland and Yorkshire, the average earnings required to get on the housing ladder are typically far smaller than in London and the South East. The question is; would those earnings still be outstripped by the local cost of housing? I suspect that in many places, the answer would be still be “yes”. For instance, average wages in Sheffield have actually dropped by almost £2,000 since 2008. The reason why so many young people gravitate towards London is the chance of a higher pay packet but the pay off is now a possible lifetime of rip-off renting.

Rent eats into most young people’s pay packets and makes saving for a home very difficult, if not impossible. Therefore, something has got to give; if we want to see more young people buying homes, we either need a fall in house prices or a much-needed rise in wages for young people, who I think are most likely to be exploited or underpaid in the labour market (indeed, many employers are now struggling to fill positions in companies as prospective applicants struggle to make the maths work).

It’s as simple as that. But how to put it into action? That’s the difficult part. A third way that we’re now seeing is the creation of a so-called Northern powerhouse, originally the brainchild of former chancellor George Osborne. However, with his rapid fall from grace following Brexit and the resignation of the official powerhouse minister Lord O’Neill this week, it looks as if this much-vaunted policy will have some serious struggles ahead.

Has Help to Buy made a difference? Yes – but only for a certain group of people for whom a home isn’t completely out of reach. They just need that extra cash incentive and research has shown that young consumers are more responsive to cash bonuses than tax-free perks. There can be a lot of scaremongering regarding the challenges facing first time buyers but it isn’t all doom and gloom.

However, it really depends on where you’re buying – the average house price and deposit varies tremendously across the country and also if you’re buying on your own. If we pull back to assess wider demographic changes in the last couple of decades, we can see people are getting married and settling down much later in life than they used to (blame it on increased longevity!) Perhaps that’s a victory for personal choice, but a bit of a setback if you want to snap up a house sooner rather than later.

It may not be romantic to advocate relationships as a way of boosting property ownership but two heads (and salaries) are better than one when it comes to government assistance; if you combine the savings of two individuals, you’re getting double the bonus from the government. It will effectively pay for stamp duty and legal fees, which can be very onerous and off-putting for first time buyers.

But it won’t be nearly enough to bridge the gap for deposits now required in London and the South East. There are no easy shortcuts here; you have to be really quite determined to save every month and be way more eagle-eyed (and discerning) in your purchases. So it’s about assessing your priorities and deciding what’s important to you.